I finished the first draft of my gloghack, Nuclear Ooze! Finished is a strong word, I guess. I looked through it again after I published the pdf, and noticed a bunch of wonking formatting, weird choices, and wording issues that I can't be bothered to go back through right now. Next time, I'll fix it.

It's primarily frankensteined together from Arnold K's original rules, Skerple's Rat on a Stick, Meandering Banter's Die Trying, and Cratered Land's Mimics and Miscreants, although there are a lot of influences (read: things I've mercilessly stolen and ripped from other games).

Tell me what you think, especially if you use it!

Here's a bonus race, because I haven't posted any actual gameplay related stuff in a while.


Dunkleostans
Bipedal jungle fish-people. Long, single-finned tails and stubby legs like newt's limbs. The tail is thick with corded muscle, wide as two human thighs. Their heads are large and covered in thick plates of bone; two beady eyes stare out pugnaciously above a wide mouth lined with two razor-sharp ridges of bone, able to shear straight through a spear's haft.

They are unwieldy on land; they propel themselves through the water with powerful motions of that huge tail and catch prey like riversquid and the bastard dolphins that move in the silty water. A bonefish kraal is made of padded, clay-thick mud, woven with water reeds and bamboo beneath the surface. They sleep in the mud, gills gently moving and bubbling through the surface.

Despite their fearsome appearance, they are quite friendly with traders and other denizens of the Hundred Rivers Valley. They usually choose to remain in conclaves with other bonefish families, although a few of their number go to Larothe or any of the other Lake Cities to make a life in the newly-burgeoning modern, industrialized world.

Perk: Your head always is considered armored. +1 AC or AP or whatever system you use, ignore most head wounds.
Downside: You must return to the water (or at least a wet bank of mud) to sleep every night, or you'll start to suffocate.
Stat Reroll: Strength 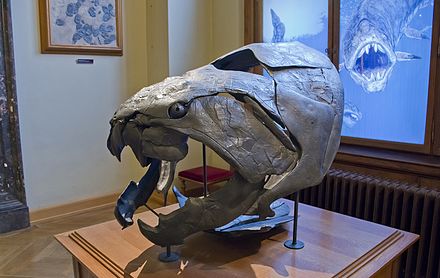 I Search the Room